Meetings are held the 3rd Thursday of the Month, with the exception of July & August, at 7:30 p.m., at the Ridgeway Gaun Bldg., 602 Main Street, in Lumberton.

The Historical Society has pie plates, notepaper, afghans, and four buildings depicting dwellings in our historic village for sale. Call Doris Priest at 609-267-4067 for more information. Click here to view the afghan!

Show all files
Size: 12 KB Membership-Application
Next »Page 1 of « Prev

Lumberton or as it was once known, Lumbertown, was a pioneer settlement. Its name came from the fact that Pine trees were abundant in the vicinity and boats and rafts carried lumber and cord wood from the Rancocas Creek to Philadelphia and other places. There were two or three lumber yards and saw mills at one time. 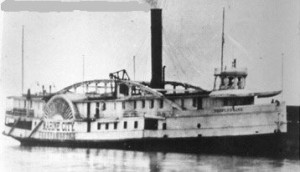 In 1683, Robert Dimsdale, an English physician, bought a tract of land from William Penn on the North side of the Rancocas Creek. Through a portion of the tract, a body of water flowed (Bobby’s Run) and entered the Rancocas Creek next to the present Railroad Bridge. Mr. Dimsdale set to work establishing a small working community revolving around a sawmill. In this area we have the housing development of Bobby’s Run as well as other schools, thus the name Bobby’s Run School and Dimsdale Drive. The village of Lumberton grew out of two bordering towns : Eayrestown, settled by Richard and Elizabeth Eayres in the late 1600’s. Eayrestown was the first substantial settlement in this area. The town was responsible for a diversity of commerce including sawmills and gristmills. At one time Eayrestown was the home of a picnic grove that had a carousel and attracted visitors from as far away as Philadelphia. William Foster settled Fostertown in 1735. His plantation was on what is now known as West Bella Bridge Road. Fostertown claimed to be the home of shoemakers, tailors and wheelwrights. There is not much left of these two towns today, but a few houses and street names. Lumberton was incorporated by an Act of the New Jersey Assembly on March 14, 1860. The town was a hub of commerce and transportation. All types of boats were using the creek – canoes, rafts, shunkus, sloops, and barges. In 1855, steamboats appeared on the creek. The first was believed to be the “Wave”, then came the “Barclay”, which was built in Lumberton and made her last trip in 1870. Both of these boats were side-wheelers. The “Minerva” was a tugboat that also mad regular trips to Philadelphia carrying all sorts of cargo from farm produce to ironware.     We w 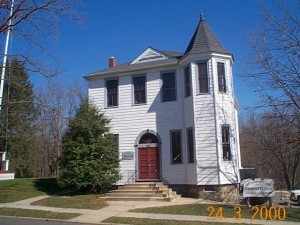 ill begin our tour of Lumberton with one of the most prominent buildings in town, the Old Town Hall. This was built in 1896 by the Junior Order of American Mechanics Lodge. In 1938, the township took it over an it became the municipal building untile 1982, when our township offices were relocated to their present location on Municipal Drive. In May of 1985, the building was renamed the Ridgway A. Gaun Community Center. This dedication was in memory of Lumberton’s Township Clerk for over thiry years, Ridgway A. Gaun. The building today is still used a a community center meeting place for local organizations and the home of the Lumberton Historical Society and their museum. 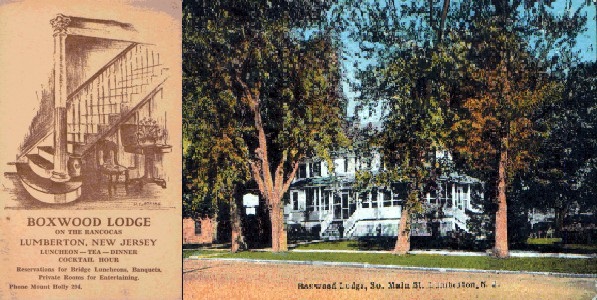 Lumberton was once a quaint little town where people from the “Big City” would come to relax and enjoy the country. We had several hotels an well-known eateries that people would do just that RELAX. One of these was the Boxwood Lodge. Located on Main Street, this restaurant was advertised as a Lodge on the Rancocas. It served luncheons, teas, and dinners. It also provided banquet and private rooms for entertaining.       This is an actual postcard of the Lodge taken around 1930. (Left) This is a photo of the property today. (Right) 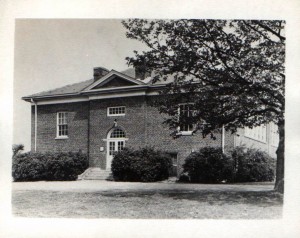 The Florence L. Walther School, now a Kindergarten through Second Grade, once housed all the Lumberton students from Kindergarten through Eighth Grade. Pictured below was the beginning of F.L.Walther School. This building was built in 1917. The school was named in honor of Mrs. Florence L. Walther, principal and teacher in Lumberton until her retirement in 1939. Some interesting facts about Lumberton Township School District. We were the first school district in New Jersey to won and operate a school bus. The PTA Association was organized one year after the state association was organized and we were one of the firsts in the state to provide hot lunches to the children. These lunches were prepared by parents and brought to the school. Even then, we were progressively minded. During the summer of 1991, the 1917 wing of F.L.Walther School was demolished to make way for renovations resulting in what is now the present F.L.Walther School.